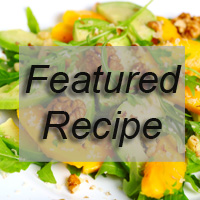 When I arrived in New Zealand in 1973, coleslaw was an exotic newcomer. As if mandated by legislation there was only one other existing salad. This consisted of iceberg lettuce, tomato, cucumber, with optional tinned beetroot or hard boiled eggs, and a thick dressing made from sweetened condensed milk.

Time and the national repertoire have moved on. But some food assumptions have lingered. One is that dairy products are essential for calcium and healthy bones. Milk is only middling on the list of top calcium providers, while foods such as sesame seeds, dates, and parsley are higher (see my TIPS page for Modern Milk – No Longer A Natural Food). Dark green vegetables are also a good source.

All of these are tasty contributors to this recipe. Tahini is a paste, like runny peanut butter, made only from ground sesame seeds and possibly added oil. It is available in jars in supermarkets. Referring to the processing of the seeds, it may be labelled ‘unhulled’ which has a bitter taste (traditionally for East Asian cooking), or ‘hulled’ which has modestly less nutrient levels (a more popular Middle Eastern staple such as used in hummus).

Remember tahini for use on crackers and toast, prepared below as a dip for vegetables, for mixing with dried fruit and honey to make truffle-like balls or sweet morsels such as halva. As with nut butters, store tahini in the refrigerator. Whenever high oil content foods are ground this exposes their protected, interior fats to air, light and heat that encourage oxidation or rancid-like destruction. Oxidised fats are the number one dietary source of free radicals, which in excess hoon around your body, vandalise cells and cause premature ageing and disease.

Nuts and seeds are excellent sources of other key minerals such as magnesium and zinc (see TIPS for Minerals…), as well as good sources of protein, fatty acids, fibre, and B vitamins. This creamy, flavourful dressing suits being tossed with salads, or a medley of steamed vegetables – try green beans, kumara and red onion. Or serve on baked potatoes, kebabs, grilled vegetables such as eggplant, or steamed fish.

As it often separates, stir the tahini in the jar before measuring (if the tahini is stiff instead of runny, use 1 Tbsp less and add 1 Tbsp olive or sesame oil to thin). Mix with the lemon juice, parsley, soy sauce and onion.

Mix the additional onion into the dressing (if the dressing is being used for one of the other meal ideas as suggested, then 1 onion is sufficient). Toss with the cabbage, carrot, cress and dates. Serve.

• Soy sauce: can be a fake, unfermented chemical concoction of caramel colouring, artificial additives, wheat and cheap salt. True soy sauce contains nothing artificial and is naturally brewed for two to three years. It is made by fermenting soybeans with the help of a healthful mould (similar to making yoghurt or cheese); roasted grain – usually wheat or barley – for flavour and fermentation, plus salt. ‘Shoyu’ is the Japanese word for true fermented soy sauce. ‘Tamari’ describes naturally brewed soy sauce which does not contain wheat or other grain. In the supermarket look for organic Ceres brand, or plain only Kikkoman (their other varieties usually contain artificial additives including MSG: TIPS).

• Tahini: is a paste – like runny peanut butter – made from ground sesame seeds and possibly added oil. It is available in jars in supermarkets. Referring to the processing of the seeds, it may be labelled ‘unhulled’ which has a bitter taste (traditionally for East Asian cooking), or ‘hulled’ which has slightly lower nutrient levels but a milder flavour (this is a Middle Eastern staple such as used in hummus). Try on crackers, toast and baked vegetables. As with nut butters, store in the refrigerator.